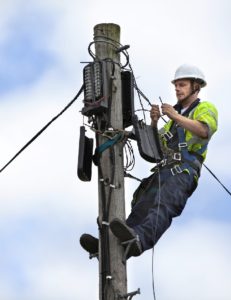 Over the last several years, major storms around the world have caused extensive damage and disruption to power and energy supplies. For example, winter of 2013/2014 the UK experienced some of the most damaging weather events in its recent history. Driven by a series of deep low pressure systems, at least 12 major storms ravaged the country - with major flooding and high winds leaving entire regions underwater for months at a time, and hundreds of thousands of homes and businesses without power. It was a season that broke records - becoming the wettest since the UK’s Met Office began reporting. This story is repeated again and again - though not always with such devastating consequences nationally.

In October of 2016, Hurricane Matthew ravaged the East Coast of the US, with intense rains and coastal storm surge causing major flooding across several states. Storm Angus in December 2016 brought winds of 80mph, heavy rain and flooding to the UK. Storm Doris followed in February 2017 - bringing further disruption, and this time snow. With the pattern set for increasingly frequent and serious storm events, severe weather continues to be one of the single biggest causes of power disruption in many regions around the world.

Energy and utility firms face a constant battle to assess and evolve grid resilience, flood prevention strategies, and master disaster planning in attempts to limit infrastructure and customer impacts to the irreducible minimum. The question then is how best to respond to those inevitable events… and do so quickly and cost effectively.

There’s little doubt an effective response to interruption or supply issues can easily save hundreds of thousands of pounds. In competitive markets, where speed matters, it helps to maintain good customer relations and to reduce churn. The right response protects remote and lone workers, and supports cost containment strategies to ensure firms stay within their Ofgen RIIO allowance. It’s just good business sense. It begins in the command centre, at the dispatch desk.

Dispatch at We Energies

While today’s dispatch environments are a sophisticated mix of technologies and services, their purpose is straightforward: to activate and protect first responders, facilitate the flow of information, and connect multiple parties throughout the course of the event to its resolution. For example, We Energies, a gas and electricity provider serving over two million customers, deployed OpenScape Xpert Dispatch from Unify to:

Moreover, dispatch environments able to integrate real-time social channels and video into their environments will be able to disseminate on-the-ground information and images much faster than those without this ability.

Real-time video from the field can be particularly valuable. Today’s social networks allow users to live-stream from their mobile phones and tablets. There is no reason the same cannot be done in a command centre environment.

“One of our requirements for a new solution was one that had increased survivability capabilities that could improve our chances of handling the weather we experience in Florida. With this new solution from Unify, we have a much higher confidence that we can operate during a natural disaster.” Martin Rose, CIO, Pinellas County

Enhancing the experience at VattenFall Europe

The dispatcher’s own experience can often be overlooked – which is dangerous when so much of the coordination and resolution rests on their shoulders. A conventional dispatch position has multiple devices and consoles for communications. There’s a console for talking on radios (or portable radios), there’s a console for talking on telephone lines (or regular desktop telephones), and there are satellite communications, intercoms and paging systems. There are handsets, headsets and footswitches, gooseneck microphones, various external speakers, keyboards and mice all related to voice communications. And there are a large array of screens and keyboards providing critical information related to the incident.

It’s not unusual to see multiple screens facing a single operator. Simplifying this environment is critical.

Vattenfall Europe, the continent’s fifth largest energy supplier, has deployed OpenScape Xpert to connect and secure engineers across 72 sites in Germany. Switching between devices, from a radio console to a telephone console, or even from one mouse to another can take time, cause mistakes and can lead to disaster. Bringing together the various modes of conversation used by VattenFall personnel onto a single screen makes operational sense in stressful situations.

One of the most critical elements of a dispatch environment is its capacity for personalisation and pre-configuration. The former supports the agent experience, allowing individuals to tailor their experience to their own personal preferences. Having buttons and soft keys in the right place undoubtedly improves the dispatcher’s productivity. So too, to a much larger degree, do pre-configured and rules-based buttons – whether on a dedicated terminal or as a software application on a laptop. Each key is coded to a specific event, and each will automatically notify the most relevant individuals, initiate conferences or specific site or community broadcasts. Rather than saving seconds, this saves minutes, and potentially lives.

The majority of today’s dispatch environments simply weren’t built for the digital world in which they must now operate – precisely the issue facing both We Energies and Vattenfall. Unsurprisingly, the lack of scalability and flexibility in these legacy infrastructures hampered efforts to modernise and improve response. The multiple screens; the numerous radios, telephones and disparate messaging systems on desks; the inflexibility of hardware terminals; the reliance on traditional PSTN infrastructures, all create time barriers in the chain. It’s entirely possible, and financially desirable, to run a sophisticated dispatch position from a single, standard laptop – bridging all those communications protocols and connecting field engineers on radio to controllers in the office, with colleagues on their mobile phones.

A large utility in the US state of Florida has been using heat mapping in the contact centre to quickly identify the scope of an issue for faster outage resolution, and hopes for results that include improved SAIDI scores.

None of this, of course, is of any use without resilience and reliability. Which is why today’s generation of dispatch solution, such as Unify’s OpenScape Xpert Dispatch, is designed to assure faultless 24x7x365 operation, being underpinned by Unify’s carriergrade switch to deliver 99.999% uptime – equivalent to less than six minutes of downtime during continual operation in any one year.

“Our customers are our top priority, and we need a solution that offers flexibility to meet changing demands and to ensure we could deliver the highest level of customer satisfaction.” Scott Johanning, Telecom Supervisor/ We Energies

VIEW ALL POSTS BY Shaun Cadwallen
-